So, she wants to be a scientist, loves learning about the planets in particular. These glow in the dark, they are pretty awesome! She knows each planet by name and has taught Little Brother also. 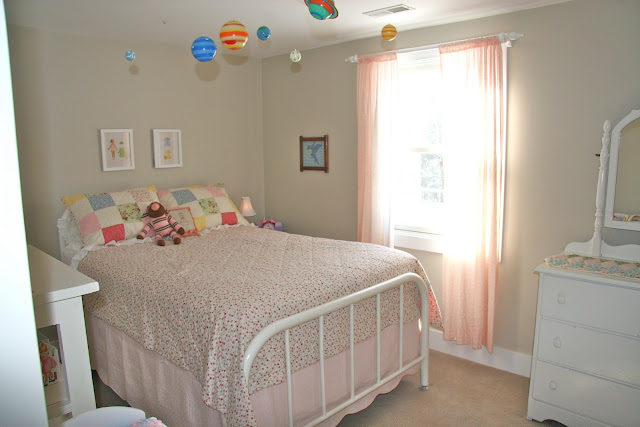 Her room was upside down awful today! I spent most of the day cleaning and organizing - have to take pictures while I can!
This dresser was mine when I was young, I painted it to freshen it up. The curtains are pink cotton - I like to keep curtains simple since I usually end up making them myself.
The quilt is the same as the shams on the other side, except larger patches. Sometimes I get tired of the bright side and change to the small print.  The bedskirt was on clearance for ten dollars. 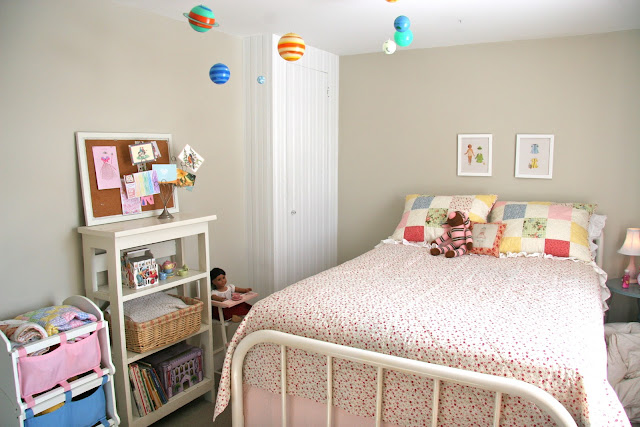 Her closet is a bit small, it was the best we could do - her whole room is tiny. The Pilot made the closet out of beadboard, I love that we were able to reuse the beadboard! 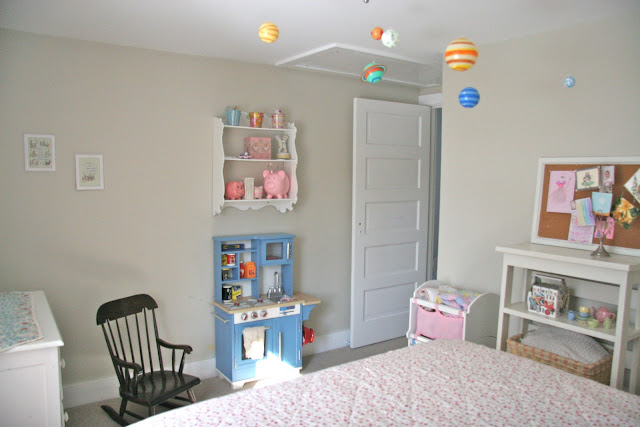 I would like to find a better storage solution for this wall, maybe an old armoire or some kind of shelving.
I would also like to paint the rocking chair and maybe paint the walls. I think they are a little dark.
Big Sister is quite the little hoarder - she stashes "treasures" under her bed. Today I found flat balloons from her birthday party in August. Once she hid scrapes of Hardie Plank siding that she had found down by the shop. She found some colorful pieces of a burst balloon at the park one day, I had no idea they meant anything to her - she found them in the trash can and was heart broken. So, now they have a permanent home in her  room.
She's so sweet, she loves to do favors for me, tonight she served me ice cream and then washed the bowls - so grown up!
Today I was going through pictures of her - just a year makes such a difference! I want to slow things down - to just keep my children young.
It seems like yesterday that she was born, I'll never forget the first time I looked in her eyes, they looked so wise. As if she understood everything, it was uncanny. Now she is a big girl, five years old, in kindergarten, so sweet and helpful. And tomorrow she'll be all grown up. I think I'll stop thinking about tomorrow! 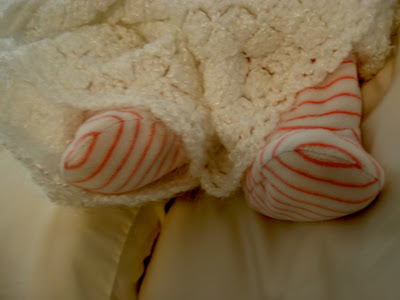 Melissa
I live in an old farmhouse that my husband and I have extensively restored. As is true with most old houses, it is a work in progress and there will always be something to finish. I share my latest projects around the house, knitting, sewing, family life and whatever else I feel like!